THE HOME OF
WORLD CHAMPIONS 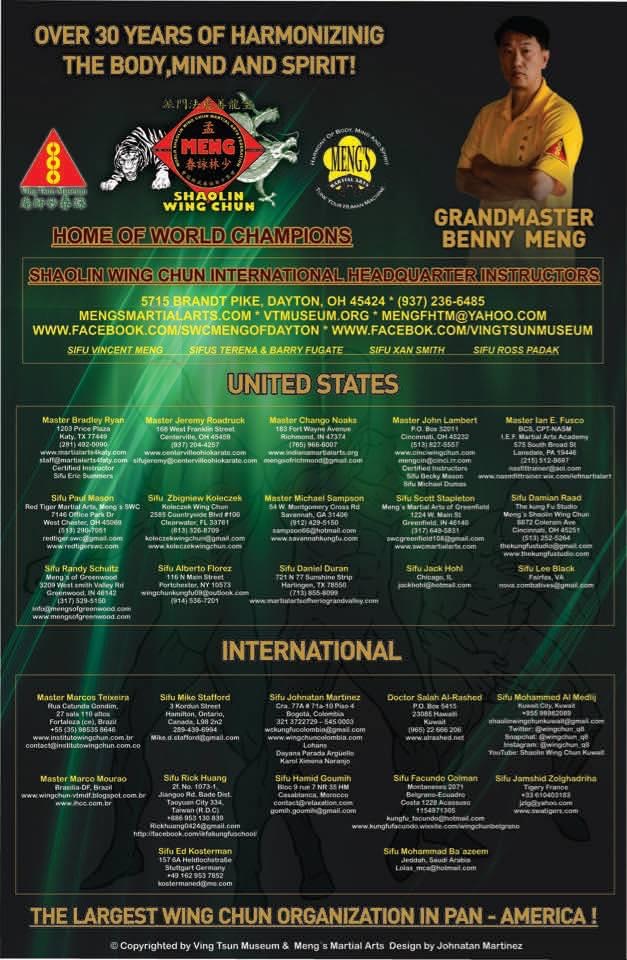 WE ARE MENG'S MARTIAL ARTS

Meng's Martial Arts is dedicated to bringing you the best in martial arts for self-improvement, health, self-defense, combat sports and recreation. With our award-winning headquarters in Huber Heights since 1987 and a growing network of schools throughout the United States and internationally, with members in over 20 countries, the accomplished team of instructors and staff members throughout the Meng's organization are dedicated to helping you reach your full human potential.

We are a team of focused, long term, and a professional organization continuously creating supporting material for our curriculum such as DVDs, Books, Manuals, in-person seminars/workshops and comprehensive online courses. Meng's Martial Arts is also the host to the internationally respected Ving Tsun Museum, the first martial arts museum in the United States.

ONE SYSTEM TO COUNTER ALL STYLES

If you want to learn all about the martial arts, most martial art "experts" suggest you to cross-train in a variety of styles. However, when it comes to defending your life or the lives of your loved ones, you should NOT rely on hundreds of techniques coming from multiple “styles" and doing what you prefer rather than what reality demands at the moment. Instead, you should use a seamless, uniform system that is in harmony with reality. When your life's on the line, don’t waste time.

Our complete Shaolin Wing Chun system originated in the Shaolin Temple and was later made popular on an international level by the late Bruce Lee. To the public, a term like "kung fu" or "gung fu" is a generic term for martial arts originating in China. Technically, the term 'kung fu' means 'skill and ability developed through hard work over time' so any expert in any type of activity could be said to have "good kung fu." The martial arts systems that came out of the Shaolin Temple - either directly or indirectly - gave rise to and heavily influenced all Asian martial arts such as Karate, Kenpo/Kempo, Taekwondo, and more. Our system had its origins in the Shaolin Temple with roots going back to 520 AD. In those ancient days, martial arts training was taught as a system because warriors were expected to have a complete body of knowledge to operate successfully on the battlefield or else they wouldn't survive their first battle. In life-and-death combat, second place is dead. Today's modern martial arts community has given rise to a variety of complex and different styles due to a focus on specialized skills, coming primarily through competition with rules set up for certain ranges or skills such as boxing (focused on striking, only), jiu-jitsu (focused on grappling, only) and taekwondo (focused on kicking), etc. In ancient days, warriors were expected to be educated primarily on weapons and all empty-hand skills from grappling, wrestling, and submissions, to throws and sweeps, to clinches, knees, and elbows, to strikes and kicks. Our system teaches proper body mechanics and then follows with tactics and strategies rather than fixed patterns and forms most often seen in various martial art "styles". Having one cohesive system is ultimately more efficient than learning four or five styles coming from different world cultures with different traditions and methods of practice to try to develop practical self-defense.

Do you want to risk your life or the life of your child on integrating several mixed styles, or have one system to counter all styles?

In our school, we teach a complete system and we are also experts at distinguishing between the martial art activities: personal development/self-improvement, self-defense/combat, health/fitness, sports/competition, and art/entertainment. Each martial art activity requires a different form of training. For example, a college student or police officer might want self-defense as well as health/fitness. In this case, it's inappropriate - and dangerous - to give them training for sports or competition because it could lead to injury or death on the street. On the other hand, we have produced world champion level athletes so we have the background, knowledge, skill, and experience to serve you and your family.

And, we go beyond the physical. Once you know how to use your body's full potential, including your THOUGHTS, FEELINGS, and ACTIONS, you can easily overcome any challenge whether that's a daily life struggle or an assailant that is bigger, stronger, faster attacking you. The key is in knowing proper body alignment to create structure, putting the full power of your skeleton into each movement instead of operating your body as a collection of parts.

LEARN MORE ABOUT OUR PHILOSOPHY

MIGHTY MIGHTS
PROGRAM
The age of 4 to 6 years are especially crucial years of your child’s development physically, mentally, emotionally, and socially.
LEARN MORE >

CHILDREN'S
PROGRAM
Targeted for ages 7 to 12, this program has a balance of action and interaction with physical exercise and extensive learning.
LEARN MORE >

TEEN/ADULT’S
PROGRAM
In addition to a complete curriculum that teaches all ranges of combat, this program also entails life skills and philosophy.
LEARN MORE >