Wing Chun Into the Arena 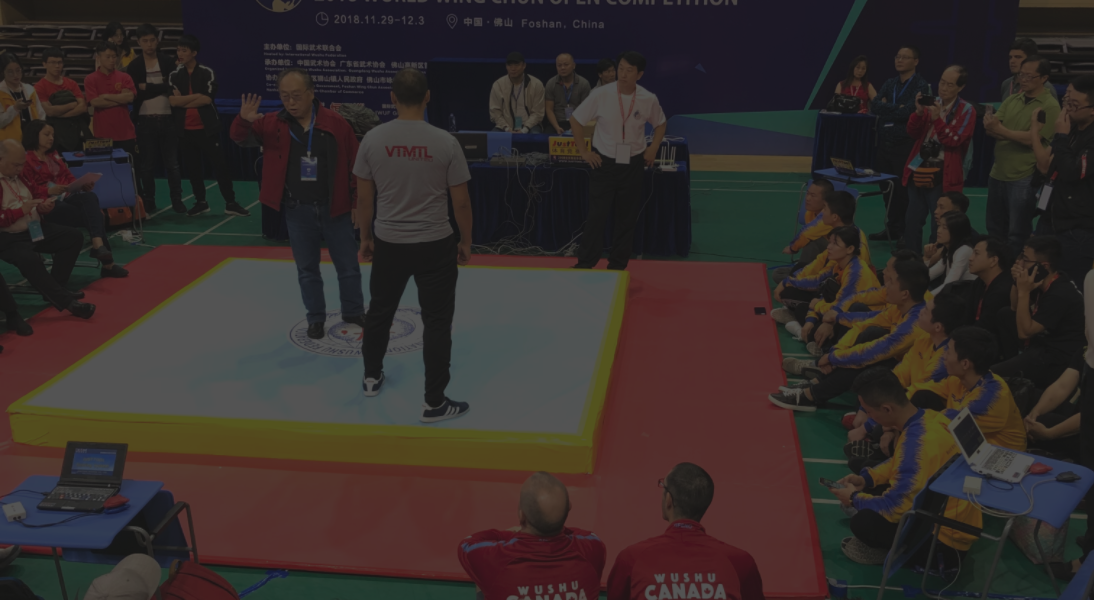 Kung fu is a popular name or term in the martial arts community, but by itself - the phrase does not mean "martial art." The proper term for martial art is Wushu (mandarin) or Mo Seut (Cantonese). The phrase kung fu refers to the skill and ability that is developed through hard work over tie. Anything a person can learn and improve is a type of kung fu. However, most non-Chinese use the phrase to refer to Chinese martial arts.

In today's modern Chinese martial art community, many arts that are more traditional use the term kung fu where a modern-day Chinese martial art competitor that was created at the founding of the PRC is often referred to as 'wushu'. In the TCMA, kung fu has hundreds of systems and subsystems, some arts trace back 100s or even 1000s of years. Modern-day China, Wushu was created - focused on athleticism and forms competition (taolu - fixes routines that can combine long and short movements, fast and slow movements, jumps, turns, twists, and more) - the new wushu. Since the opening of China in the late 80s, the PRC added back in the fighting competition, called Sanda. Today, the modern-day Wushu has expanded to over 160 countries, known as International Wushu Federation. This organization is recognized by the IOC. As a modern- day combat sport, the sole purpose is to promote Chinese martial arts into the Olympics. In the sport of Wushu, most of the competitors are world-class, elite athletes in forms and fighting. The mainstream Chinese martial arts community still maintains many of the old traditions - open to all ages from kids to elders, multiple attitudes, and skill levels.

Recently, the idea to merge the TCMA community with the modern wushu community.

When Asian martial arts first came on the scene in the West, some of the earliest systems were from China in the late 1880s but the system was mostly hidden from the public and taught to small groups. The Japanese martial arts came to the West later but exploded in popularity in comparison to TCMA due to better organization. The result is, if you look at the early introduction, people tend to mention Judo and Karate but in reality, the Chinese esoteric martial arts have been in the West much longer timeframe.

One of the TCMA that came on the scene in the 60s was an art called Wing Chun. It was primarily popularized by the late Bruce Lee. Wing Chun was the only system he formally studied. There were many great Wing Chun teachers that followed. Today, due to Bruce Lee's popularity and his movies, WC was first introduced to the West on a global scale. There were many other great Wing Chun teachers who left Asia and traveled all over the world. Today, Wing Chun is a household word in many martial art communities throughout the world. Recently, Wing Chun had the 2nd explosion of growth due to the Ip Man series of movies. Today, there are an estimated 5,000,000 people practicing Wing Chun in the world. The system is known for its practicality and efficiency. To outsiders, the system can look very simple due to the economy of motion. The forms are not acrobatic or require a high degree of athleticism. This is because the forms are on an advanced level of martial arts, containing many advanced concepts and principles of martial arts. In essence, one of the highest levels of Shaolin Kung Fu but to beginners or outsiders, it's quite simple and easy to perform the movements.

Due to its simplicity from the surface, gain popularity to the public but maintain hard core attraction to advanced martial artists and fighters.

When the Wushu leaders interested in tapping into the TCMA community, they picked Wing Chun as a prime candidate due to its popularity, ease to enter the art, but also have depth. On one such meeting with modern Wushu leaders, US president Anthony Goh and his good friend Sunny Tang, also Canadian Wushu president also happen to be hardcore Wing Chun grandmaster himself. Dunn Way, famous in Canada - also top disciple under famous Wing Chun Sifu, Grand Master Moy Yat.

One is thinking about the best way to promote Wing Chun, other is thinking about how to get involved in modern-day Wushu with TCMA. The idea was created that Wing Chun will be introduced into the IWF as an official, formal events but not by creating modifications to the forms but by retaining traditional roots. This was the beginning of the next tidal wave for Wing Chun and Wushu.

Many private, small group meetings took place until this 2018 when major Wushu and Wing Chun leaders gathered in Macau to work out the details to officially intro Wing Chun as part of IWF. Rules, regulations, training, certifications all of that were planned, which accumulated into an IWF sponsored Wing Chun World Championship.